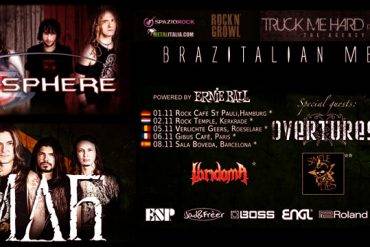 Italian power metallers Secret Sphere and brazilian metallers Almah led by ex-ANGRA singer Edu Falaschi will join forces for a co-headlining European tour this November. The official video trailer can be viewed below:

After a successful year of shows to promote the high acclaimed album "Portrait Of A Dying Heart" ended at the Wacken Open Air Festival, SECRET SPHERE are currently in the studio re-recording their second album "A Time Never Come", considered as one of the best power metal album's coming from the italian metal scene since years.
Read More
News