Best known US rock band from the 80s

Legendary LA Hard Rockers AUTOGRAPH have released the video for their new single “Every Generation”,  from the album GET OFF YOUR ASS, released in late 2017 via EMP LABEL GROUP.  Directed by Paul Gervasi, the video was filmed on location in Phoenix, Arizona. 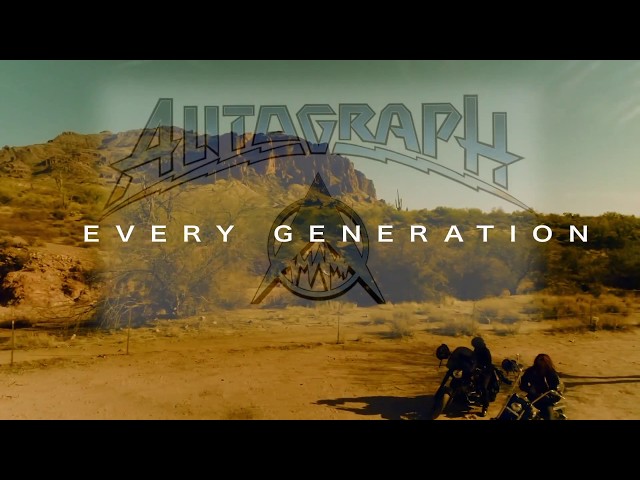 GET OFF YOUR ASS is the first official studio LP from the revamped quartet, featuring original/founding members guitarist Steve Lynch and bassist Randy Rand, alongside new vocalist/rhythm guitarist Simon Daniels (Jailhouse), and drummer Marc Wieland. The first single “Get Off Your Ass” reached the Top 10 on the Mediabase Classic Rock charts, with repeated airplay on nationally syndicated shows including NIGHTS WITH ALICE COOPER.

The band made an appearance on the 2018 MONSTERS OF ROCK Cruise,  and continues to tour through 2018 supporting GET OFF YOUR ASS (and also recently released an Artist Signature Roast Coffee of the same name with Ellefson Coffee Co), with announced shows including ROCKFEST 2018, plus shows with Night Ranger, Skid Row, Kix, Slaughter, and more.

GET OFF YOUR ASS features an updated, hard-edged (and keyboard free) sound for the band, featuring down-tuned guitars, and the fiery, blues-soaked delivery of Daniels, as evidenced on tracks like “Every Generation”, “I Lost My Mind In America”, and the first single, edgy title track “Get Off Your Ass”. The album also features an updated live version of the band’s classic rock staple “Turn Up The Radio”, performed by the current lineup.

Forming in 1983, Autograph gave the world the perpetual Rock anthem “Turn Up the Radio”, which still commands nearly constant airplay on Classic Rock stations around the World, and has become an iconic piece of pop culture, making appearances in mass media classics like Grand Theft Auto: Vice City, and more recently in the hit film HOT TUB TIME MACHINE.

With seminal albums Sign In Please [1984], That’s The Stuff [1985], and Loud and Clear [1987]. as well as years of touring alongside legendary artists including Mötley Crüe, Dio, Van Halen and Aerosmith, AUTOGRAPH left an everlasting imprint on rock ‘n’ roll. Now this undeniable Rock legacy has been reclaimed with GET OFF YOUR ASS.