British melodic metallers CODE OF SILENCE – who are fronted by Brazilian vocalist Gus Monsanto (REVOLUTION RENAISSANCE, ADAGIO, SYMBOLICA, LORD OF MUSHROOMS) posted a track-by-track album breakdown video provided by band leader and bassist James Murray who also supplied the debut album’s historical theme of the Knights Templar at the time of the Crusades. The video can be viewed here:

James says: “Although the album is thematic each song can be enjoyed in its own right separately away from any concept.”

CODE OF SILENCE recently released their debut video ‘Sky Is Falling Down’ – which has gained in excess of 15,000 views since posting and an informative EPK introducing the band:

“Taken in the round, this is a fabulous rock album. As a debut album it’s simply stunning.” Get Ready to ROCK!

A guitarist who wants to go to Japan, a drummer who thinks political leaders should settle arguments over a few beers, and a Brazilian who likes Scottish breakfasts. These are some of the fascinating facts you will glean from Code Of Silence’s newly launched website – www.codeofsilence.co.uk

The album – ‘Dark Skies Over Babylon’ – has been written and produced by Paul Logue (Eden’s Curse) and mixed by Alessandro Del Vecchio (Eden’s Curse, Hardline, Lionville). Stylistically it covers a range of genres from hard rock to progressive, fused with highly melodic metal.

The band includes seasoned vocalist Gus Monsanto, who has worked with Stratovarius vocalist Timo Tolkki (Revolution Renaissance) and Adagio and guitarist Ben Randall who for a time was with Power Quest. Scott McLean on keys (Concept Of Time and Falloch) and John Clelland on drums (The Jack) complete the line-up.

The album is released in Europe on 25 February and in North America on 9 April via Mausoleum Records. It was released in Japan via Rubicon Music on 23 January. There is a limited pre-order offer before release date at the band’s website. 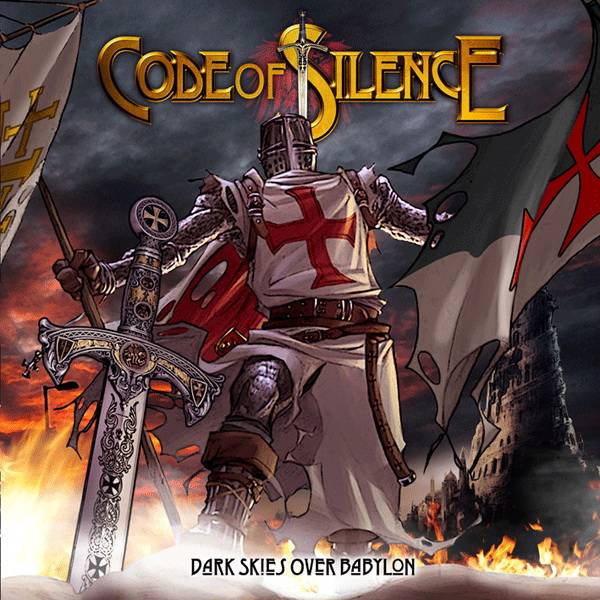