This really is a huge one for the HRH family – the very best in sleaze rock all under one roof for a weekend of bands and booze over the 29th and 30th of August 2020! 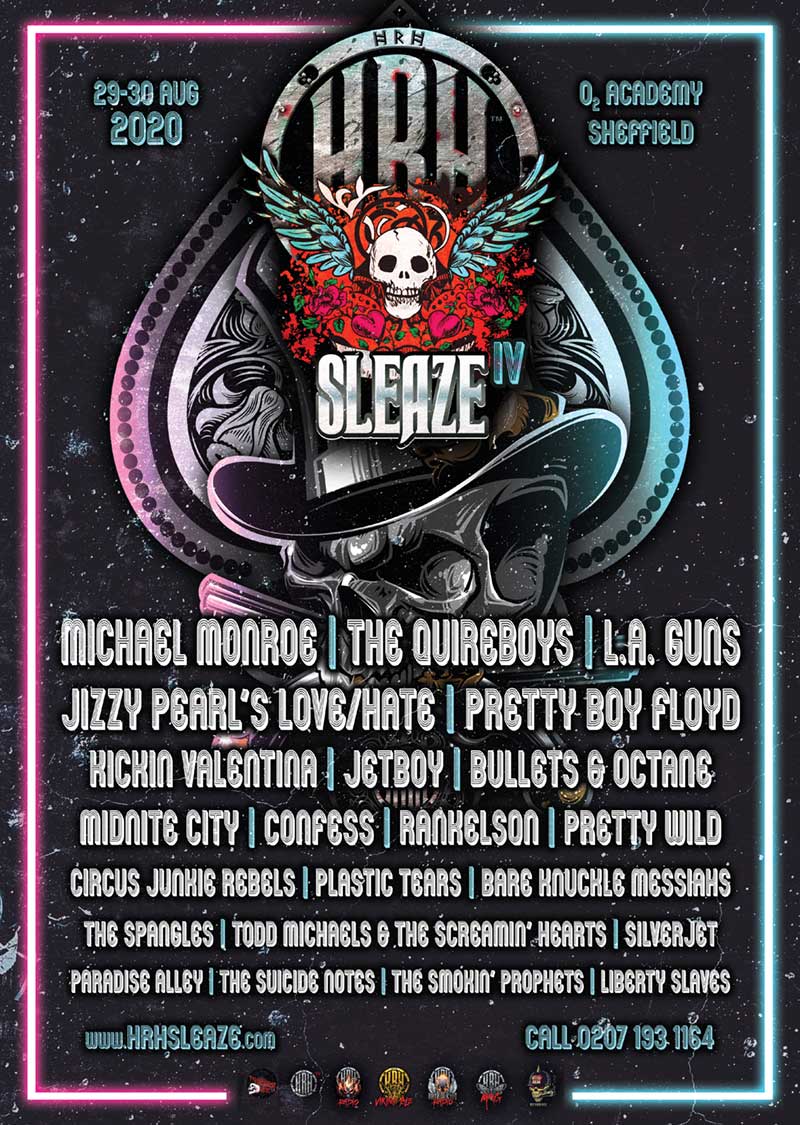 HRH Sleaze Cycle IV has gone into overdrive – we are bringing you one of the most exciting lineups ever, with bands from around the globe descending on The O2 Academy in Sheffield!

Tracii Guns and Phil Lewis return to HRH Sleaze with the classic lineup of L.A. Guns – every time this iconic L.A. band hit the HRH stage we are treated to a masterclass in sleazy hard rock and Sleaze IV will be no different. Take a listen to their latest live album “Electric Gypsy Live” and you’ll soon hear why this legendary band are back to the very top of their game.


A firm favourite of the HRH family, former Hanoi Rocks frontman Michael Monroe impressed everyone present at HRH AOR V with an incendiary performance that will be long remembered.  The latest single by Finland’s finest – “One Man Gang” – is testament to his seemingly un-faltering talent.


The HRH Family surely need no introduction to The Quireboys – suffice to say that their latest album, the critically acclaimed Amazing Disgrace, is making waves in the music world.  Spike, Guy and the gang are as busy – if not busier than they have ever been, with the quality of their recorded and live work still as vibrant and strong as it was back in 1990 when they took the world by storm with “A Bit of What You Fancy”.


Another welcome return to the HRH fold is the legendary Jizzy Pearl – one of the most recognisable voices in rock, he brings his Love/Hate to the O2 Academy Sheffield to treat us to classics from timeless albums such as Blackout in the Red Room and Wasted in America.

True veterans of the sleaze rock scene, Californians Jetboy were formed in 1983, and are in their second active spell having re-formed in 2006.  Their latest album – 2019’s Born to Fly – is a staple on Hard Rock Hell Radio and is the band’s first full album of brand new music since 1990.


Hollywood leather boyz Pretty Boy Floyd have been playing with their electric toyz since 1987 with just a 5-year break in the ‘90’s – and a minor spat in the 2000’s.  Although they have only released 3 studio albums (the latest being 2017’s “Public Enemies”) the band are still very much active on the sleaze circuit playing iconic venues such as The Whisky and Rainbow Bar in Hollywood – the capital of sleaze.


Set to deliver a huge kick in the balls for HRH Sleaze IV next year will be Americans Kickin’ Valentina.  With ex-Jetboy singer D.K. Revelle now on board the band are going from strength to strength as one of the leading lights of the new wave of sleaze rock.


The quality of bands at HRH Sleaze IV is beyond compare – in addition to L.A. Guns, Michael Monroe, Jizzy Pearl’s Love/Hate, The Quireboys, Jetboy, Pretty Boy Floyd and Kickin’ Valentina we are stoked to announce a further 15 incredible bands:

Sweden’s Confess are making their HRH debut and we can’t wait – also hailing from Sweden are Pretty Wild as they continue their goal of taking over the world with their “in your face” live set, having just released their latest album “Interstate 13” this year.

Now based in L.A., Bullets and Octane have toured with the very best from Avenged Sevenfold to Stone Sour, releasing 6 albums in almost 20 years.

One of the most active bands on the UK sleaze rock circuit are Midnite City.  Formed by Tigertailz frontman Rob Wylde, the band are filling rock clubs around the country on a regular basis, and have just announced a tour of Japan.

Also joining us for HRH Sleaze IV are 3-piece The Spangles, featuring members of The Main Grains and The Idol Dead – they list cider as the band’s main interest, so that could get messy.  Self-proclaimed bastards of rock’n’roll, RanKelson are back after a 32-year break – and ready to carry on where they left off.  Circus Junkie Rebels make the short hop from Stoke, and Bare Knuckle Messiahs – led by former Tigertailz frontman Kim Hooker – make the trek from Wales.

Playing on their home turf at HRH Sleaze IV are Sheffield based Silverjet, while Londoners Paradise Alley have been active in one form or another since 1992.  Finland are represented by veterans Plastic Tears, formed in 1992 and making a rare UK appearance while Nottingham’s Todd Michaels and the Screamin’ Hearts take a short ride up the M1 to join us in Sheffield.

Last but not least, we welcome Southampton’s The Smokin Prophets, The Suicide Notes who describe themselves as the “illegitimate sons of punk and sleaze”, and hard rockers Liberty Slaves from nearby Huddersfield.