To be brutally honest, we were only ever going to do one of these, but after selling the last 2 years out in 9 days flat and being utterly bombarded with bands wanting to play it from all around the globe, the Gods have let it be known that the Battles continue until Ragnarok itself. The way it’s looking, the bands who have joined our ranks have left us speechless and it looks like HRH Vikings III will be another thunderous line-up indeed, making “our thing” even more special. 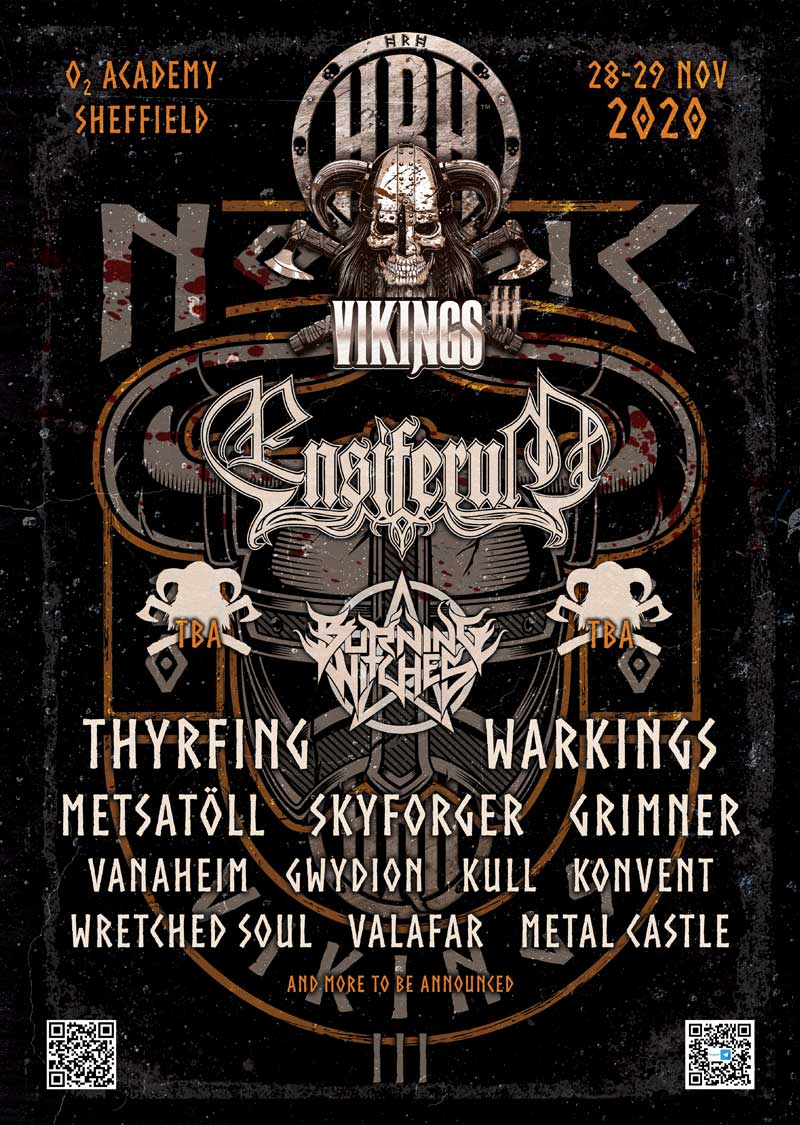 At the boar’s snout of the shield wall for the Saturday at Vikings III is Enisferium.  The legendary Finnish melodic folk metallers from Helsinki will be celebrating 15 years as a band when they head to Sheffield in 2020.  The sword bearers released their first full-length, self-titled album back in 2001 and have been on the march to conquer the world ever since – and are currently on tour in the US and Canada.

Leading the charge from the European mainland will be all woman Swiss metallers Burning Witches. With their new enchantress Laura at the helm, they will have a new album out in time for their Saturday appearance at HRH Vikings III.  The band are no stranger to huge festivals, having slain Wacken and Sweden Rock – they are sure to go down a storm!

Emerging from the underworld, Warkings are destined to spend eternity in the realms of the gods, but not before the Roman tribune, Nordic warrior, Crusader, and Spartan join forces to conquer the main stage in Sheffield on the Sunday.  Be afraid.  Be very afraid.

Representing Sweden at HRH Vikings III will be Thyrfing.  Named after the cursed blade of Norse mythology, they will be in their 25th year, having released 7 studio albums of the most crushing Viking metal on the planet.

Another band celebrating 25 years of crushing skulls will be Skyforger from Latvia.  The pagan warriors bring their unique melting pot of folk, thrash, black and historical metal to Vikings III.  This will be a rare chance to see the band that was formed from the ashes of doom metallers Grindmaster Dead in the UK.  Steeped in Baltic mythology and warfare, Skyforger will conquer the main stage on the Sunday.

Swedish folk-metallers Grimner recently raised the horns to their 10th anniversary, and released their 3rd studio album, ‘Vanadrottning’ in 2018.  The 6-piece have their own mix of aggressive but melodic metal, wielding instruments such as flutes and mandolas as part of their live spectacle.

Also confirmed for Vikings III are Vanaheim, Hwydion, Kull, Konvent, Wretched Soul, Valafar and Metal Castle with many more to be announced!

We are expecting this to explode, but as with everything we do, we always incentivise the Early & the Loyal, especially when we’re about to launch a third Valhalla Adventure where we all go A-Viking a third time round.

We shouldn’t be doing these prices, however for 4 days ONLY, we are offering HRH Classic Hotel Packages for £95.00 per person & HRH Royalty Hotel packages for £120.00 per person – 2 nights accommodation which also includes your weekend passes & breakfast (Royalty & Classic). If you’re local or already have accommodation, weekend passes will only be £25.00 No Booking Fee… but only for 4 days when prices will more than double.

The official launch of HRH Vikings III is Thursday 28th November @ 12.00 GMT. These absolutely ludicrous deals only apply to midnight 1st December when they fly with the Ravens & Valkyries to Asgard itself.

Don’t wait around to secure this as we’re limiting the number of tickets at this rate, especially with next years line up. HRH Vikings III will be a three arena, 2 day affair on Saturday 28th & Sunday 29th November 2020.

We have people flying in this weekend from over 26 countries. Once they see it, they will be coming from everywhere around the globe!

Grab your place in the “feasting hall” with horns raised high, online using the links above or use the Live Chat Service on our website: www.hrhvikings.com