‘…maybe it’s time for ACCEPT to regroup and try something new or just completely retire. The record is almost average and like this not ACCEPTable!’

So here we have the fourteenth album by ACCEPT. The line up is Wolf Hoffmann on guitars, Herman Frank on guitars, Peter Baltes on bass guitar, Stefan Schwarzmann on Drums and Mark Tornillo on vocals. This is the vocalists third album with the band. Produced, mixed and mastered by Andy Sneap. Let’s see what we get for this release.

You should think that with the size and experience of the band, the budget or advance that they probably receive to make these records plus the people involved in the making of it that it will turn out to be the ultimate record of the year. Well unfortunately not! Where should I start?

Mark Tornillo is for sure no Udo Dirkschneider we all know that by now. The problem I’m having is that his voice is rather dull and has a range of a few notes. The high “wannabe” screams on like “Dark Side Of My Heart” are rather pulled and sound forced. He’s better of singing in a much lower range like “Fall of the Empire”. The melodies are rather unfitting and have no real presence.

Peter Baltes is a straight forward bassist who follows the riff which he has for many years now. Nothing out of the ordinary here.  The riffs by Wolf Hoffmann seem to be the only interesting part in this album as the rest brings nothing new to the table. The production by Andy Sneap also seems very dull. In the mix the snare drum is way too loud in the mix, vocals partially unedited and out of tune, the rhythm guitars seem to be pushed way to the back in the mix. However the real problem is the overall sound of the record. The stereo image is too narrow and has to transparency. The mastering didn’t do the job to beef up the record.

Blind Rage is the record for die hard ACCEPT fans only. It brings nothing new and is rather boring and tiring. If this would have been a debut album by a no name band today they would have stored the boxes with the CD’s in their garage. We in America have this saying: “quit while you’re ahead”. And maybe it’s time for ACCEPT to regroup and try something new or just completely retire.

The record is almost average and like this not ACCEPTable! I give 6 points for this unnecessary release for the time spent and efforts and deduct one point for trying to fool us with this low grade production. 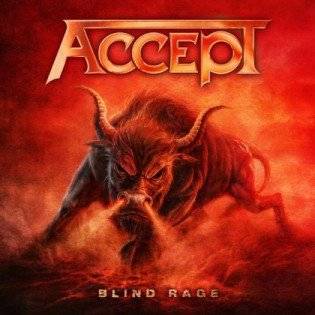