UK Rock Artist, THE KUT, has released the official music video for it’s new single ‘X-Ray- Eyes‘. The track will be made available digitally midnight on Halloween. The song is taken from their long-awaited debut album ‘Valley of Thorns‘, which was released in May 4th, 2018 via Criminal Records / Cargo Records UK. The album was produced by James “Lerock” Loughrey ( Skindred / Def Leppard / White Zombie / My Vitriol).

THE KUT landing with “Valley of Thorns” in the Top 10 of the UK Rock Albums Charts. Recently nominated in the Live UK Music Business Awards as Breakthrough Artiste 2019, THE KUT is best known as the moniker of multi-instrumentalist and PhD graduate, Princess Maha.

The latest single ‘X-Ray Eyes’ is the 9th from the debut album.  A UK Songwriting Contest Finalist / Semi-Finalist for three years running, the single screams exactly why THE KUT is gaining attention.  A modern taken on the 90’s alt.scene, the single features rock vocals, intricate harmonies, eerie riffs and heavy beats.  Not simply a mashup of her influences, THE KUT is new music for fans of Nirvana, Hole, Lunachicks, Deftones, Incubus and Placebo.

Joined by a collective of regular musicians, THE KUT has toured six countries to date, with performances at Download Festival, Camden Rocks Festival and Rebellion Festival. The forthcoming tour features 10 UK dates to celebrate the UK Top 10 Rock Album and 10 years of independent music! 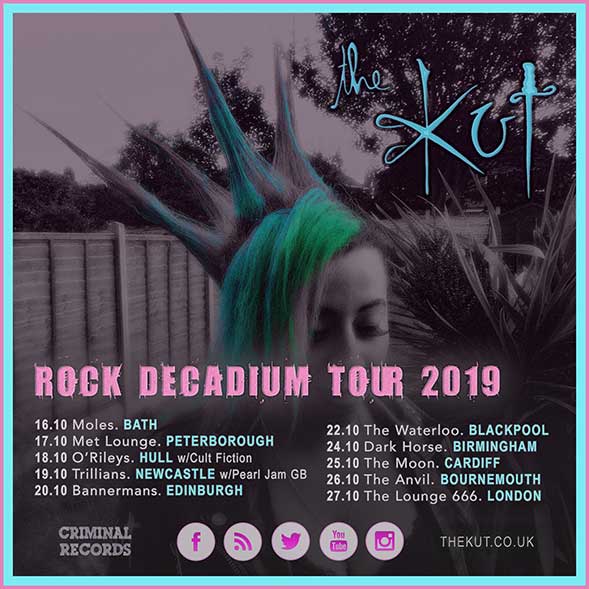 Active on the UK and European alternative rock scene, THE KUT, is the alter-ego of multi-instrumentalist, Princess Maha. The live outfit has seen many guises, with the most recent line up featuring Diana Bartmann (drums) and Stella Vie (bass / bvs).

“Led by Princess Maha, this is a neat twist on grunge pop”  – Kerrang! Magazine

“Marks the precise point in the Venn diagram where L7 meets I Wanna Be Your Dog meets Courtney Love, which is equal parts terrifying and a cause for long and rowdy celebration. Punk’s not dead, pass it on.” – Classic Rock Magazine